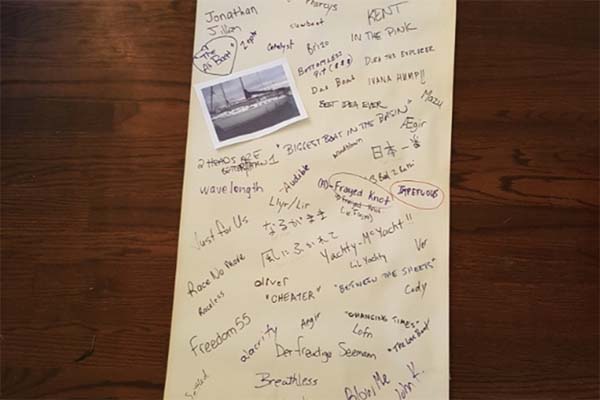 What Do I Name the New Boat?

Naming a boat is more difficult than buying a boat, at least for me. After all, It took me weeks to name my children. Naming is important. It signifies something about the namer and something about the namee. Dreams, desires, hope, fantasies, becoming…. It really is an impossible task. So when it came to naming our most recent boat, it took months. We brainstormed, searched websites, enlisted help from friends (including posting a mural in our house and not letting anyone leave our parties until they’d written down a boat name), and searched for nautical, sea related terms in other cultures, other mythologies.  It just seemed so daunting, so permanent, so suggestive, so reflective of us. When naming our first boat we went with an acronym with a private, personal hidden meaning which included our names. We were young, what can I say? RRISCC was risky. People had fun though and the prize winning guess was better than the actual. Rob Really is Cathy’s Clown was my favourite. Credit to Janis and Rick. Generally speaking if you’re going with a in-joke or obscure reference consider how often you really want to have to explain it… The second boat, which came after our Sprinta Sport was holed on the start line, was an SR21 also referred to as the SR Max. Many of the SRs used Max in the name and we went along. As we’d always been known as the Loud Family (who hasn’t heard Rob in the sailing club? I can always find what boat he’s working on by listening), it was no surprise that our new boat became Maximum Volume. A close friend whose supportive husband matched her pregnancy weight gain named their new SR Max, Maximum Density. While it helps to narrow things down with parameters, it’s important that there is a meaningful connection to the name. Cody of South Shore Yachts is in the process of naming his SR27. We started brainstorming names using SR as the parameters. I’m voting for Silly Rabbit (tricks are for kids). Perhaps you have to be a 60s kids to get the reference to the breakfast cereal commercial… Again, do you really want to explain it over and over? Boat number 3 a C&C half ton (30 footer) went unnamed for at least a full season, maybe two. We were thriftily and cheaply reusing a C&C 33 boat show boom cover and at regattas people called it Rob’s 33. When our local ski resort (or as local as you can get in Niagara) sponsored us, we defaulted to their name and we became Kissing Bridge. I’d always wanted to be on the Love Boat! When Kissing Bridge lost its mast we were on the hunt for Boat #4 (http://southshoreyachts.com/tips-for-purchasing-a-used-yacht/) . We found d’Artagnan a Dufour 43. We had no parameters, no sponsor, no ideas… at least no worthy ones. One of the searches we did was the top Boat names. It’s a good way to rule out names. In 2017 this was the Boat US list: (https://www.boatus.com/pressroom/release.asp?id=1296) Serenity Seas the Day (there’s always word play!) Andiamo Irish Wake Freedom Othana Happy Ours Firefly Unless you want to blend in with everyone else out there you may want to avoid adding to the redundancy. Fortunately none of them was on our list anyway. We considered, albeit briefly names of figures in other cultures and mythologies that we felt a connection to: OSHUN – African goddess of love and sweet waters Tangaora – Maori god of the sea Pereplut – Slavic goddess of fortune and drinking AEgir – Norse giant of the sea known for hosting elaborate parties (but also married to his sister…) The more you explore the names of gods and goddesses the more you realize there is more to them than the initially appealing brief description. Plus you don’t want to risk offending a god or goddess.

We stared at the mural list on our wall, tried out names, narrowed it down to 3 which we then had to check in the federal registry to see if they were actually available. This is irrelevant if you’re not going to register your boat federally (Federal registry is important for pleasure boats if you hope to travel out of country). In the end we settled on Shearwater, which became Shearwater I; as Shearwater, Shearwater II, III and IV were taken.  And it was just that, we settled. The name appealed as Shearwaters were one of the birds that followed us in our 5000 nm across the Pacific. In the midst of vastness and aloneness, it was reassuring to have faithful friends visiting. We liked the connection and the potential for a silhouette graphic. Shearwater 1 it is.

All Pricing Shown in Canadian Dollars